Even here in the Subverse, we've go a record heat wave. Only difference seems to be that here "heat wave" means thing are actually on fire, green fire mind you, but there all the same.

Of all time for the wind unit to go tits up. I swear Maytland had something to do wif that. It's hotter than a Bruegelors arse in 'ere. A moment ago I realized that, what you Morts would refer to as, sweat that had collected in my shorts was actually boiling. Yes, that's right, i was actually making bollocks soup.
I've closed off the upper floors for fear that the patrons may melt. That and the pong from up there had already felled several of the smaller wait staff that we had to drag out. Sleeping on the clock will they, not bloody likely. We're all now huddled round a standing fan blowing cross the last bag of frozen oglon peas. Given enough time, they'll make a fitting side dish to that soup I made earlier. 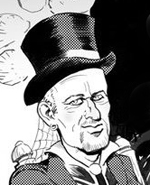 Recently while I stood sat upon a chair at the 'ol front desk, i received a periodical from one Jason Crawley or The Bloke to 'is friends. This parcel contained not one, not two, but three installments of his "Bloke's Terrible Tomb of Terror". To my surprise this was no common want to be mag, trying to cash in on the success of former greats. This was a true return of the pulp horror magazines of the past. With the likes of Mike Hoffman and others artists and writers on board, this Bloke knew he needed the right kind of talent to create a book that could stand on it's own feet along side the grates like Eerie & Creepy. He's got a good start. I eagerly wait to see how "Bloke's Terrible Tomb of Terror" progresses in future. If you care to peruse this piece of primordial pulpyness that The Bloke 'as put together, get your own damn copies here:

these copies are mine you silly Morts. Now back to more pressing matters. the bog in number 42 'as been overflowing for the last 'alf hour. MAYTLAND!!! where is that daft sod.... Fleam 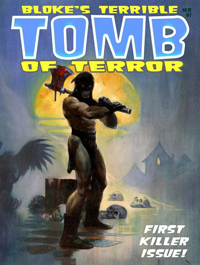 Posted by Unknown at 2:21 PM No comments: